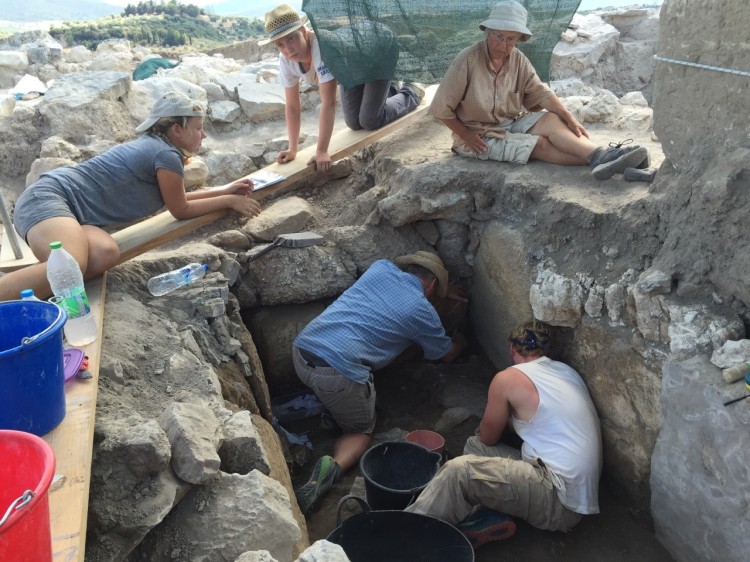 Like any due date for a report or an exam, the end of our excavation period crept up on me, as I’m sure it did for most.  You can tell by the piling pottery sherds, the larger-than-normal circles under everyone’s eyes, the frantic looks while sorting flotation (no doubt recalling how many crates are on the porches), and the decreasing number of social people at ouzo hour.

Of course, everything exciting happens at the end.  Which is great, really, but generally results in more last-minute work, including returning to site after lunch for a few lucky volunteers.  Enthusiasm has to run high for these returnees, because pulling a 12-13 hour day in 35 degrees Celsius (95 degrees Fahrenheit) takes a special kind of crazy… and they must be ready to bring that same energy back at 6 am the next morning.

If you are one of the crazies, you are left both incredibly excited and incredibly drained.  A few things to know before venturing to skip your day-off and tag on an extra 6 hours to your work day:

A) Brains begin to melt. Once upon a time, you had a name all to yourself. Then suddenly, you become Jess, Steph, Austen, or all of the above and begin to respond to any name besides your own–since “Emily” becomes synonymous with “blonde girl” and surely cannot be referring to you.

B) Laughter attacks (a side-effect of the melting brains). You think I mean laugh-attacks, but that would be misleading; I mean that laughter literally attacks the trench in an unstoppable way. It appears out of nowhere.  Be prepared to annoy everyone around you to the point of getting kicked out of the trench, especially when sharing a precariously placed board that bounces when sitting and laughing (this was the instance when I first saw Steph’s death glare, which I had wrongly assumed was not possible).

C) Great surprises are assumed to be dreaded chores. Example: Brendan announces that he has such a surprise for you in the afternoon. You immediately assume he intends to send you, during the hottest part of the day, to clean the massive polygonal wall that radiates heat and blocks any wind.  In fact, he plans to bring everyone iced coffee. (… However, this may be something that naturally happens when you’ve been surprised by Brendan too many times.)

D) Dinner does not wait for you. While obvious, this one cannot be missed. If you expect to come home and casually clean up in an attempt to look nice for our 8 o’clock dinner, you’ll be sorely disappointed.  Tops, you will have 20 minutes between exiting the car and forking the Greek salad, which is generally gone within 5 minutes, because, well, everyone’s last meal was at 2 pm.

E) Good memories accumulate. Despite the tough work, the reward is enormous.  Not only are you shell-shocked with the realization of what you’ve uncovered and what it means for the rest of the project, you are also strangely reluctant to head home, though your body has come to the end of its rope.  And with so many fun new friendships, built on the back of shared-struggle and excitement, the only way to say goodbye is to say, “See you soon!”

This beautiful country has a truly wealthy culture despite its economic situation.  The kindness of its people, the impact of its history, and even its sweltering heat will be missed by this first-time excavationner.