This page features illustrations and three-dimensional models to complement Brendan Burke’s 2017 proposal “Becoming Mycenaean: A Burial Complex at Ancient Eleon (Central Greece).” Many of these images are not yet published; please do not circulate this page beyond SSHRC evaluators.

This map was made as part of the EBAP Surface Survey, documenting the site’s topography and standing features prior to excavation. The location of ancient Eleon can be found here on Google Maps.

This model documents the excavations at the end of the 2016 season. The site’s steep cliffs on the north, west, and south give way to a more gentle approach at the east, where the polygonal wall was built by 500 BCE. Most of the settlement remains exposed in large trenches date to the Late Helladic IIIB and IIIC periods, and a burial complex of the Early Mycenaean period is at the center of the excavations.

Two architectural monuments have been visible since they were constructed: the curving polygonal wall built by 500 BCE (foreground) and the Medieval tower that most likely dates ca. 1500 CE (background).

Polygonal Wall: The South Bastion by Jordan on Sketchfab

The polygonal wall is best preserved at its southern terminus, where the bastion stands 5 meters tall. Three courses of irregular blocks Eleon’s eastern stand upon the ashlar leveling course and exposed foundations of roughly cut stone. 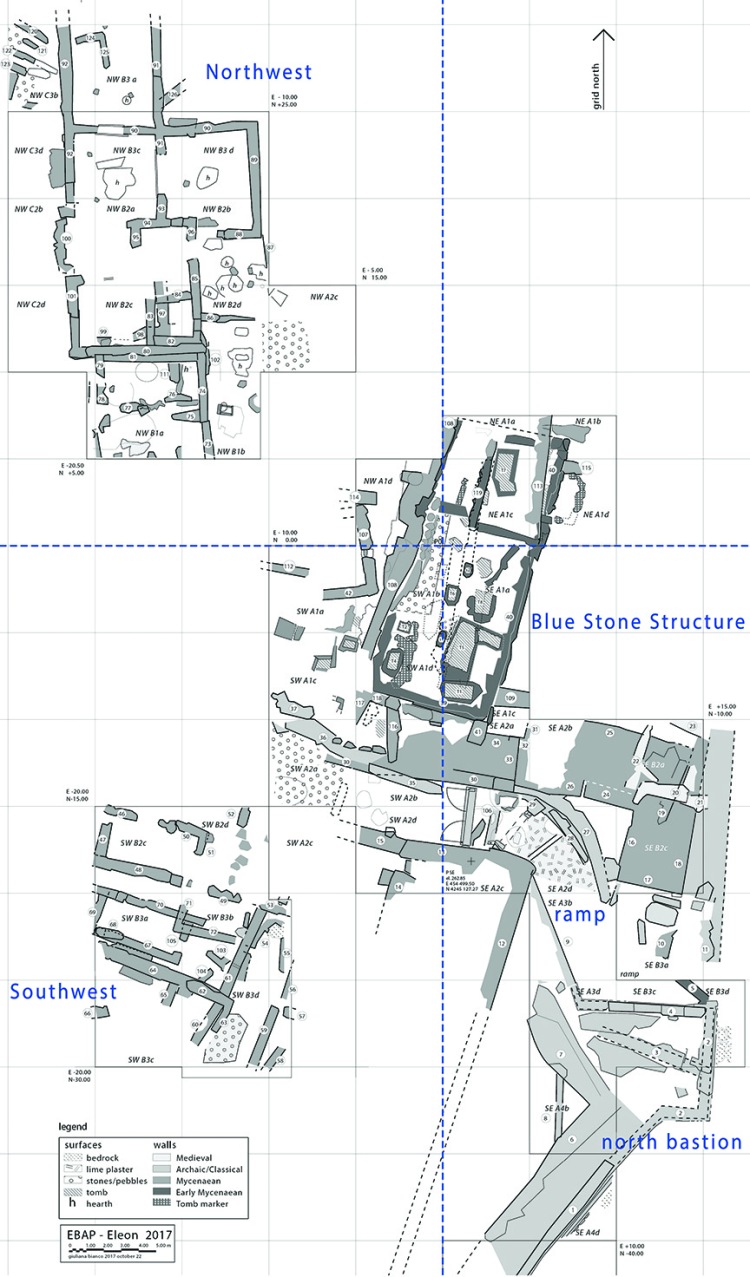 Excavations from 2011 to 2017 have revealed Mycenaean settlement remains in the Northwest and Southwest quadrants. In the Southeast, the polygonal wall ends at the north bastion and transitions into a less substantial construction lining the entry ramp that was used throughout the 5th century BCE.

This aerial photograph is a georectified photomosaic created through drone images made at the end of the 2016 season. 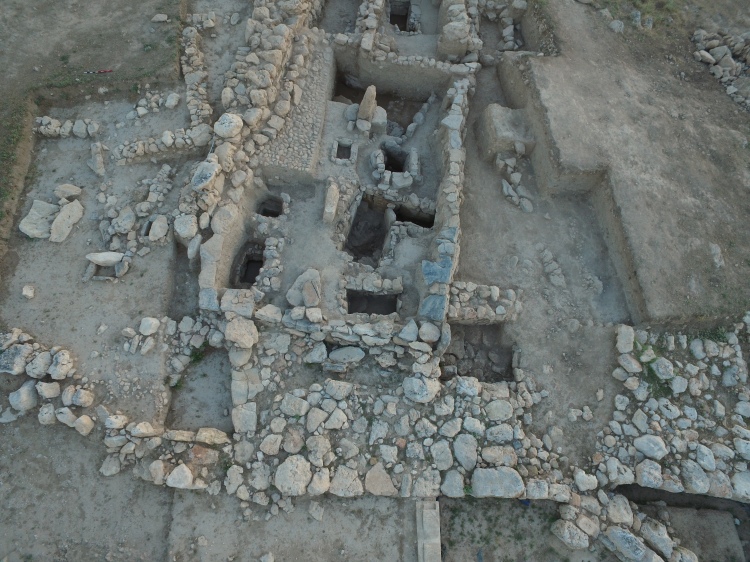 Aerial photo of the Blue Stone Structure as revealed at the end of the 2017 season: eight excavated graves are visible within the rectangular structure, and the full length of the structure’s eastern wall is measured at 17 meters.

The burials of the Blue Stone Structure all date to the Late Helladic I period, or the “Shaft Grave Era.” The largest tomb excavated so far was marked by a rough stele – one of two that are still standing in situ. After the time of burial use, but still within the Late Helladic I period, the tombs were covered by stone platforms and a clay tumulus.

The steatite jewelry mold (measuring 7.3 x 4.8 cm) was found in a Late Helladic IIIB level in the Northwest excavations. Open molds of this type were used to produce glass ornaments that were sometimes covered in gold foil. The designs cut into this tool are typical of the adornments found at Thebes and other major sites, including a large waz lily, papyrus, and cockle shell.

The site’s post-palatial settlement is characterized by vessels like the LH IIIC Early kylix with a distinctive conical shape. The cup was found with two others, fallen into a bathtub in a room that was destroyed by fire.

A new phase of activity at Eleon is marked by the accumulation of Archaic vessels and figurines. This kylix with four horizontal handles is typical of Boeotian style in the 6th century BCE.

Figurine with Braids SF0061 by Jordan on Sketchfab

The elaborately coiffed hair of this terracotta figurine indicates a date in the mid-5th century BCE. This suggests the cultic activity at Eleon may have been carried out for several generations.